You are here: Home / Conductive Compounds

Conductive polymers and plastics are increasingly desired for a growing number of sophisticated end-uses. Most plastics are naturally non-conductive, hence their wide use as electrical insulators. Because of their ease of fabrication, chemical inertness and low density, polymers are highly desirable materials as replacements to conventional materials. When some transfer of electrical charge is needed, modifications to the polymer must be made to increase conductivity. This has resulted in plastics being formulated for use in four distinct application categories of increasing conductivity:

The tendency of materials to conduct electricity is generally expressed in terms of surface resistivity Ohms per square (Ω2) – i.e. how resistant they are to the transfer of electrons.

Generally thermoplastic polymers have a surface resistivity of 1012 to 1016 Ω2 which characterizes low transfer of electrons making them effective insulators. To overcome this limitation, electrically conductive additives are added to the polymer compound.

The secret behind the best selection of compound/ concentrate lies in three important factors:

After exceeding a certain loading level of conductive particles, a polymer compound changes the electrically insulating base polymer into electrically conductive plastic. The decrease in electrical surface resistivity is due to the increased amount of particles and can be described using a percolation model. The percolation behaviour depends on aspect ratio of the particle, the particle size and its density and the chemical structure. 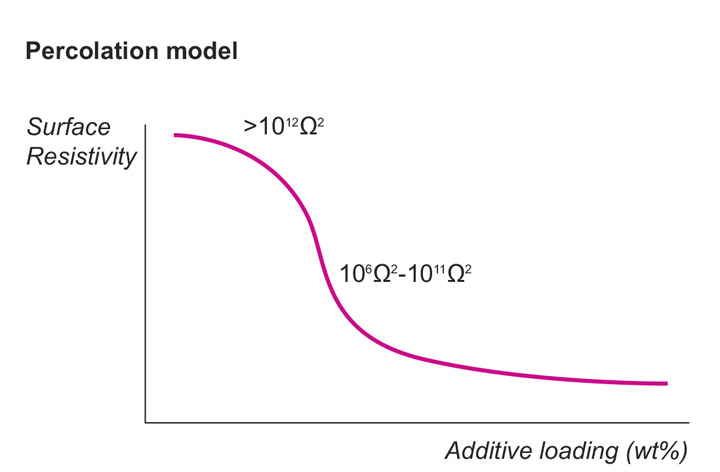 With an extensive knowledge of dispersion of carbon nano-particles into polymers, Hubron has developed a range of conductive compounds and concentrates based on carbon particulates (high structure carbon black, graphite’s, grapheme’s and carbon nanotubes) incorporated into specially selected polymer grades to offer the most reliable and cost-efficient choice for producing electrically conductive plastic compounds. We are also able to develop a grade suitable for you.

Speak to us about your needs and let us give you the winning formula.